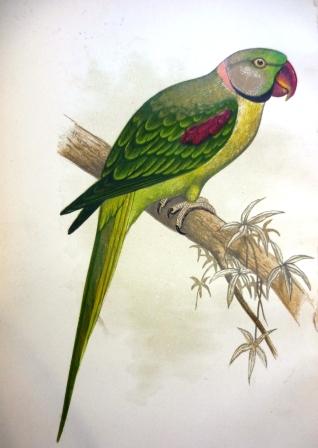 Parakeets are often on my mind because the squawking of the Ring-necked parakeet (Psittacula krameri), which is now naturalised in the UK,  accompanies my journey to work most mornings when walking down the road to the station or passing through St James Park.

This beautiful illustration is of  the Alexandrine parakeet (Psittacula eupatria), a close relative of the Ring-necked parakeet, which is native to India and South East Asia.   The image comes from Dr Karl Russ’s book The Speaking parrots a scientific manual published in 1884.  The author states in the preface that the book is intended to be a source of advice on the purchase, care and training of parrots for all lovers of the species.  In the first chapter he explains why the book concentrates on parrots and in particular those with the power of speech.

“There are many advantages which the parrot enjoys over all other creatures…its fellows in the animal kingdom are behind it…especially in the power of imitating human words…it must decidedly belong to higher ranks of creation…[which gives mankind]…a lively and widespread love…for creatures which can speak, that is to say for birds, gifted with the power of speech”

Our copy of this book is one of a number of beautifully illustrated ornithological books that were donated to the library by relatives of Henry Gray (1865-1939). Henry Gray was a prominent London practitioner whose obituary in the Veterinary Record states “The study of birds was his first and enduring delight; in later years nothing gave him greater satisfaction than a fireside talk about birds …In this country he was the veterinary pioneer of the scientific study of birds in health and disease”. (1)

If you would like to look at more of these beautiful illustrations why not pay us a visit? 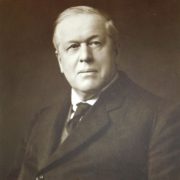 A Few Of My Favourite Things
1 reply

Honouring our ‘professional brethren on the Continent’

South African War Diaries
We use cookies to ensure that we give you the best experience on our website. If you continue to use this site we will assume that you are happy with it.OkRead our Cookie Policy
Scroll to top