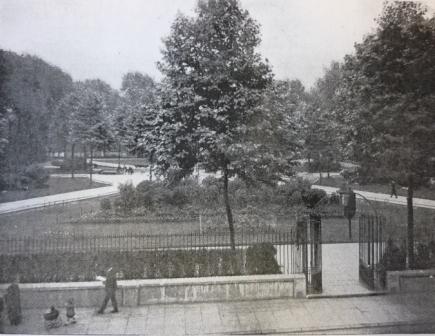 May is local and community history month so that, together with a rather nice photograph from 1913 that was included in the material we received from Fegans (see the previous post), has led to me writing about one of the places I go to eat lunch – St John’s Gardens on Horseferry Road.

The garden started life as the burial ground of St John the Evangelist, Smith Square  which is now used as a concert venue.

The burial ground was consecrated in July 1731 and very quickly became overcrowded, so much so that 20 years later three feet of earth was deposited over the whole site to solve the problem.  According to one report 5,126 graves were dug in a 10 year period.

In 1781 two watchmen were appointed to protect the site, and a wall was added in 1784 – at that time the stealing of bodies for dissection was common.  In 1814 it was felt necessary for the watchmen to be armed with pistols!

The burial ground was finally closed in 1853, with Lord Palmerston claiming it was a public nuisance.

After 30 years lying neglected, a group of local residents formed a committee with the aim of converting the ground into a public garden.  Their plans were finally realised in 1885 when on the 23rd May The Duke of Westminster declared the gardens open.

This photograph of the gardens was taken from James Fegan’s office window on 17 June 1913, the opening day of what is now Belgravia House, the home of the RCVS.

The view from the same spot today is not that different – the layout of the flower beds and pathways is similar, though there are more buildings surrounding the gardens.

If you look carefully today, nearly 160 year after the burial ground closed, you can still see evidence of the former use – some of the gravestones are lined up against the walls.  Sadly most are so worn it is hard to see that they are gravestones at all – and the inscriptions have long gone.

Cass was Master Mason to His Majesty’s Ordnance and worked on a number of London churches as well as Blenheim Palace and the stonework front of Burlington House.  The grade II listed sarcophagus is said to be the earliest granite monument in England.

St Johns Gardens © Copyright Fegans and used with their permission.

Image of Christopher Cass’ sarcophagus © Copyright Kevin Gordon from the Geograph website and licensed for reuse under this Creative Commons Licence.

Rabbits: from prey to pet
Scroll to top