Blog - Latest News
You are here: Home / Historical Collections Blog / Book Collection / Brunel on the power of the horse 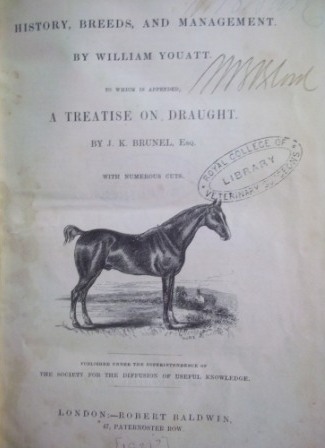 Title page of The Horse with Brunel’s name incorrectly written

Search the library catalogue for Isambard Kingdom Brunel, born on this day in 1806, and you will find one entry – for William Youatt’s book The Horse: its history, breeds, and management to which is appended, a treatise on draught first published in 1831.

The link to Brunel?  The inclusion of his ‘treatise on draught’ – though the work is not always attributed to Brunel and in at least one of the editions of The Horse his name is given as J. K. Brunel (see picture to the right)

“the subject of draught by animal power … has long … occupied the attention of theoretical and practical men … our object [is] to collect what has been said and done … arrange it methodically, to show in what manner the information may be applied … rather than to attempt to produce anything absolutely new.”

So the treatise is in effect a literature review which covers, in nearly 50 pages, the practical  application of theoretical investigations into the power of a horse.

A glance at the contents reveals the breadth of the topics covered:  ‘the power of the horse, how calculated’; ‘difference of opinion as to wheels’; ‘draught regarded as to the act of drawing, and the resistance to power employed’; ‘the manner in which the animal adapts himself to his load’; ‘errors with regard to this in some ancient sculptures: real action of the horse in walking, trotting and galloping’; ‘advantage of springs [on carts]’; ‘hardness of road surface’ etc.

Illustration showing the action of the horse when pulling depending on the angle of the harness.

Brunel includes theories from ancient history, referring to the Elgin marbles and the usage of horse harnesses in the Illiad, as well as those that were current at the time he was writing.  He also includes a number of predictions about  the future eg the demise of the canal system due to the growth of the railway system.  (The treatise was written two years before the founding of the first major British Railway, the Great Western Railway in 1833.)

So how is it that a treatise by Brunel is included in Youatt’s book?  It would appear that it is for the simple reason that both works were commissioned by the ‘Society for the Diffusion of Useful Knowledge’ and put together as each complemented the other.  (See Ewer, TK (1991) Youatt and Brunel.  Veterinary History Vol 6 No. 4 pp120-124 for an exploration of the link between Youatt and Brunel.)

We will return to The Horse and look at Youatt’s much larger contribution in a later post.

A not so tall tale
Scroll to top