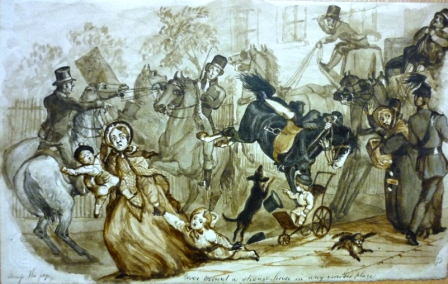 I have recently had the opportunity to look more closely at the almost 400 watercolours by Edward Mayhew that we acquired in 1990.

Edward Mayhew (1808-1868) was the brother of Henry Mayhew, founding editor of Punch.  It is thought he spent his early years in the theatre before enrolling at the London Veterinary College in 1843 when he was in his 30s.  He qualified as a member of the RCVS on 6 February 1845 and became a member of RCVS Council just over a year later.

Reports of the meetings in the three years Mayhew spent on Council show him to be a man who was not afraid to speak his mind, especially where the Professors at both the London and Edinburgh veterinary schools were concerned.  His rather short obituary in The Veterinarian (November 1868 p810) says very little about him except “He was well known as the author of several veterinary works.”

The drawings, which were converted into woodcuts  for publication, reveal a man of no small artistic talent.

The collection includes illustrations:  of diseases

The stages of laminitis 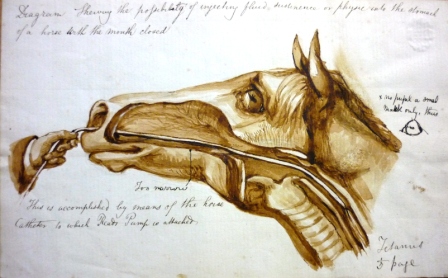 Inserting a tube into the stomach of a horse

show how horses, and their keepers, should be housed

They also reveal something of the social conditions at the time

A Peep into the Grooms Home

My favourites are the ones which show Mayhew’s  sense of humour – for example this drawing titled ‘Never mount a strange horse in a crowded place.’  I particularly like the ‘flying’ dog on the bottom right!

Never mount a strange horse in a crowded place

Whilst researching for my lastest blog post on Mayhew I found an interesting account of the Mayhew family in George Hodder’s  Memories of my time: including personal reminiscences of eminent men  (London: Tinsley Brothers, 1870)

The section on Edward Mayhew (pp58-62)  gives information on his health when producing these illustrations  and mentions that his brother Julius, an architect, helped with the illustrations and designs for the stables.

Happy 125th Birthday
We use cookies to ensure that we give you the best experience on our website. If you continue to use this site we will assume that you are happy with it.OkRead our Cookie Policy
Scroll to top